I am thankful for all those difficult people in my life; they have shown me exactly who I do not want to be. –Anonymous

In case you missed it, on Saturday the Associated Press reported that Vice President Mike Pence had canceled plans to attend a Trump campaign fundraiser in Montana following revelations that the event’s hosts had expressed support for the QAnon conspiracy theory.

QAnon is a far-right conspiracy theory alleging that a cabal of Satan-worshiping pedophiles running a global child sex-trafficking ring is plotting against President Donald Trump, who is battling them, leading to a “day of reckoning” involving the mass arrest of journalists and politicians. No part of the theory is based on fact.

The AP had reported that the hosts of the fundraiser, Cayrn and Michael Borland in Bozeman, Montana, had shared QAnon memes and retweeted posts from QAnon accounts.

After the cancellation, it was reported that Daines and Gianforte do not know the Borlands or what QAnon is. Rosendale would not say if he did know them and his spokesman said that he was unaware of QAnon.

So now the opposition researchers should be checking campaign contribution records to see if the Borlands donated to these people who don’t know them. They should also check social media posts to see what photos are out there.

As the saying goes, “The truth is out there.”

I bet QAnon will be at the event in Belgrade. Take lots of photos, folks!

On another note, if the doors open at 12:30 that should give everyone plenty of time to pass around the virus before the event begins. #MaskUpMT

The Montana Free Press is reporting that a website run by U.S. Steve Daines’ campaign is promoting mail voting, but only if you list that you are a Trump supporter:

…visitors to the website’s survey page only get the opportunity to enter that information if they answer a question first: “Do You Support President Trump?”
If the user selects “yes,” they’re redirected to the site’s voter status update form.
If the user selects “no,” or “undecided,” they get a simple message thanking them for their feedback and stating that their response “has been recorded.”

When the Montana Free Press asked the Daines campaign about it, campaign spokeswoman Julia Doyle said in an email:

“Our campaign is looking to identify our supporters and turn them out to vote — this is what campaigns do.”

That’s an ignorant response from Doyle. I would hope that Daines employs people who are bright enough to write programs to distinguish between the two selections. Maybe not.

I’m waiting to see one of the political parties or one of their supporters post some incorrect information about what day to vote or where to vote. If you see something like this, take a screenshot of it and turn the person who posted it into authorities. It’s illegal.

The United States Postal Service (USPS) sent a postcard to customers recently with some tips like, “If you plan to vote by mail, plan ahead.”

It also tells me “Please read the important information for U.S. citizens.”

Since I am a U.S. Citizen (first-generation Montanan), I decided to read further…

Here are the two sides of the postcard (click to enlarge): 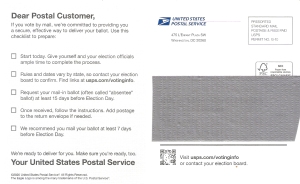 A few of the reminders probably ticked off President Trump and his supporters. Here’s one:

It’s the old “mail-in ballot” versus the “absentee ballot” argument. The USPS basically says they are the same.

Didn’t the President say the USPS could not handle all the ballots if they were mailed? The USPS says they are ready!

I watched a lot of football this weekend; how about you? Since there wasn’t an NFL preseason, it was tough on me to watch a game Thursday, a little bit of college football Saturday, and three more NFL games on Sunday. There are two NFL games tonight (Monday). Whew!

Pro Tip: Make sure you have new batteries in your remote.

2 thoughts on “The Monday Memo”