It is amazing what you can accomplish if you do not care who gets the credit. – Harry S. Truman

Last week I asked readers “With President Trump going after U.S. Sen. Jon Tester over the VA Secretary issue, does that make you more or less likely to vote for Tester this November?”

Thanks to all those who participated in the poll.

I happened to receive a campaign flier from Republican U.S. Senate candidate Russ Fagg the other day reminding me that my absentee ballot will arrive soon.

I’m not sure I ever received a flier this far ahead of receiving my ballots, but Fagg gets to be the first. Here’s a look at the flier (click to enlarge): 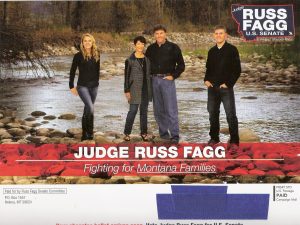 The family photo looks a little odd with the son and daughter separated from mom and dad. They are a nice looking family. On the reverse, Fagg brings up three main issues: Faith, Family, and Country. He then lists some major endorsements (Racicot, Martz, Stephens, Hill, and Rehberg). From my conversations with some conservatives, Fagg is probably the old school Republicans’ choice in this primary. We’ll see if they have any clout left.

This flier is much better than his campaign TV ad, which I think is terrible. His campaign ad scared me so much that I stood guard for several nights waiting for “criminal illegal aliens” to come over my fence and try to murder me…

There are primaries today mostly in the east and Midwest. There are four primaries being held in West Virginia, Ohio, Indiana, and North Carolina.

The Hill takes a look at the main races in each. West Virginia may be the most interesting.

If you live in a city that is having a school election today, please vote to support the kids.