The trouble with having an open mind, of course, is that people will insist on coming along and trying to put things in it. – Terry Pratchett

Welcome to the big show to end the week and September “Caught My Eye” (CME)!

Topics this week include Montana Supreme Court & the Last Straw, Gianforte & Sales Tax, The Western Word picks the winning candidates (so far), Three Things You Should Do, The Perfect Cake, and much more!

You knew they were coming. Even last week I mentioned in CME that I wondered if third-party ads would play a role in the Montana Supreme Court Justice #3 race. The answer is yes – and it will probably get the award for the nastiest ad, at least so far.

The Flathead Memo blog broke the news about the new ad from the “Stop Set ‘Em Free Sandefur Committee” called “The Last Straw.” You can visit the website and view the ad HERE. Here is the script, courtesy of the Flathead Memo:

For some, it’s Judge Dirk Sandefur’s refusal to give prison time to two child pornographers. For others, the last straw is Judge Sandefur’s mere seven-year sentence of a man guilty of repeatedly raping a 10-year old girl. But for all, Dirk Sandefur’s decision to give no prison time to a man convicted of sexually assaulting a toddler and holding a gun to the child’s head is the Last Straw.

I imagine we’ll see a few more ads from this group. The way the election/campaign rules/laws are these days, this really is the wild wild west.

This is not a “fish story” that Greg Gianforte speaks about in a recent ad, so you won’t need your waders, but as Joe Biden would say, “This is a big %^&%$ deal!”

The Montana Democrats revealed that Republican candidate for Governor Greg Gianforte “lobbied to replace Montana’s income tax with an unpopular sales tax when he was CEO of RightNow Technologies.”

Ouch. Being for a sales tax in Montana is probably the second worst thing to support as a Montana candidate. Being for more gun control is first. Both will probably earn the candidate a loss.

Right after the announcement, the Gianforte campaign sent an email telling the press that Gianforte “Does Not Support a Sales Tax.” One reason he claims he does not is because in his 406 plan, “The zero in his tax relief plan clearly states: NO SALES TAX.”

The Gianforte campaign also provided information from a 2002 interview with the Billings Gazette, where it was reported:

Gianforte’s solution is for Montana to eliminate its state income and capital gains taxes and replace them with a sales tax, which be ideal for encouraging high-tech business but he conceded was perhaps not possible to sell politically…Another option, he said, was to lower the state’s income tax rates, calling the top rate of 11 percent “offensive,” and pay for tax rate cuts by no longer allow state taxpayers to deduct their federal taxes from state taxes.”

I don’t think that last paragraph helped Gianforte’s fight against what the Montana Democrats were saying.

Maybe Gianforte once supported a sales tax and does not now. This will haunt him for the remainder of the campaign. All the Democrats need to do now is run a 15-second ad several times a day until Election Day saying, “Greg Gianforte supports a sales tax.”

If The Election Was Held Today:

Almost every week until Election Day (mostly on Friday), I will pick who I think is winning eight key races from President on down to state-wide races in Montana. This does not mean they will be the winners in November or that I am personally supporting them, I just think they are winning their contests at this particular time. These picks are made from what I am hearing, seeing, and from my vast experience in the political world!

If the election was held today, I think the winners would be:

President: Hillary Clinton
-The Monday debate showed Donald Trump that he needed to prepare. Clinton seemed more presidential and I think the polls in the coming days will show her widening her lead in this race.

MT House At-Large: Ryan Zinke
-They are still going head to head with their ads which is great for Denise Juneau to be able to match the incumbent Zinke. I still see this race leaning toward a Zinke win, although with the news today about Zinke’s “relationship with convicted felon Kevin Moore” there might be some problems on the horizon for Zinke.

MT Governor: Steve Bullock
-With the news that Montana’s budget surplus is projected to shrink to $109 million by next year that could have helped Greg Gianforte. But, it was revealed that Gianforte once supported a sales tax in Montana to replace the income tax (although he says he does not now). The sales tax issue is more of a dent in Gianforte’s campaign than the smaller surplus is to Bullock’s campaign.

MT Attorney General: Tim Fox
-Tim Fox is being asked by fellow Republicans to use his office for political purposes, which may hurt him with moderates and independents if he does appear to be political with any investigations. Larry Jent is better qualified but he’s just not getting any traction.

MT State Auditor: Jesse Laslovich
-We’re still yawning here, but Laslovich is favored. I saw some Matt Rosendale signs in my recent travels, so there is a heartbeat.

MT OPI: Elsie Arntzen
-Melissa Romano is showing some signs of life. Arntzen is better known, but Romano has the MEA-MFT Union behind her – she needs their help and money.

MT Supreme Court Justice #3: Kristen Juras
-The Last Straw ad from the third-party group will probably hurt Dirk Sandefur. Do his supporters have a response besides talking about Juras’ dislike of a sex column in a college newspaper?

If you see any of the races differently, let me know in the comment section. Unlike the Billings Gazette, here at The Western Word we allow comments.

Three Things You Should Do:

Since it’s getting close to crunch time this campaign season you really need to keep informed!

You can get the best independent commentary and info about the candidates by doing three things:

3. Subscribe to The Western Word blog at TheWesternWord.com (on the right side of the home screen) to get columns delivered straight to your inbox. 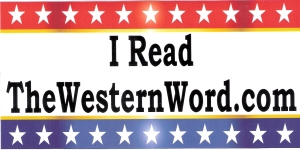 A former deputy apologized to a woman he tased by giving her a cake that had “Sorry I Tased You” written on it. The story gets more interesting because it was about the theft of some “sweet tea.” Read the whole story from USA Today HERE.

3 thoughts on “Caught My Eye…”