You know you’re on the right track when you become uninterested in looking back. – Unknown

As I normally do this time of year, I wanted to update readers about how much campaign literature I have received in the U.S. mail, or that was left on my front door.

So far, I have received about 38 pieces of campaign literature.

None of it has changed my views on a candidate, although some of the “Steve Daines and China” photos made me laugh: 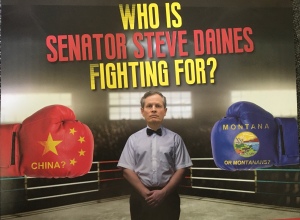 There are just about 35 days left. Make sure you are registered to vote!

Toward the end of the debate, head over to The Western Word and take part in the debate poll. Let me know who you think won.

According to The Commission on Presidential Debates:

Chris Wallace, the moderator of the first 2020 presidential debate, has selected the topics for that debate.

Subject to possible changes because of news developments, the topics for the September 29 debate are as follows, not necessarily to be brought up in this order:

All debates start at 9:00 p.m. ET and run for 90 minutes without commercial interruption.

I watched Shep on Fox News in the afternoons for years. He was one of only a few on the Fox News Channel that I thought was non-partisan.

Now Shep has a new job on CNBC. Good for him!

“The News with Shepard Smith” will premiere on September 30th at 7pm ET on CNBC. The live, one-hour program will broadcast each weeknight from CNBC’s Global Headquarters in Englewood Cliffs, N.J. with encore presentations of the newscast airing at 12am ET and 4am ET.

With this addition, CNBC should do well in the ratings.

My Kansas City Chiefs played their best game of the season Monday night in Baltimore, beating the Ravens 34-20. The Chiefs are 3-0.