In three words I can sum up everything I’ve learned about life: it goes on. – Robert Frost

Welcome to the big show to end the week “Caught My Eye” (CME)!

Topics that I am providing commentary about today include Trump, Daines, and Twitter, Fagg vs Rosendale, Ethics Complaint, Tester’s number 14, the canceled summit, and One More Thing!

A U.S. judge in New York on Wednesday ruled that President Donald Trump may not legally block Twitter users from his account on the social media platform based on their political views. (Reuters)

That is the correct call.

Daines did not respond to my tweet. Maybe he’s blocking me…

Republican U.S. Senate candidate Russ Fagg seems to be the “campaign flier king” in this primary. People have told me that have received three or four fliers in the mail since absentee ballots went out.

Now Fagg is going after one of his opponents, Matt Rosendale. In his latest campaign flier, Fagg contends that “Matt Rosendale certified, under penalty of perjury, he was a Maryland resident in 2015.” On the reverse of the flier, it shows the form Rosendale supposedly signed.

So how about it, Matt, did you do that? Check out the flier below. Click to make it larger. 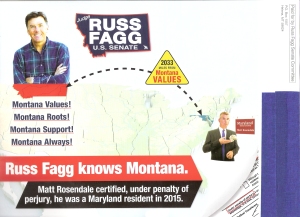 The real reason the Democrats did this was to get some media attention and bring back up the assault on the reporter by Republican Greg Gianforte.

It worked! The Associated Press picked up the story. Heck, even I decided to write about it!

The best response to the complaint came from National Republican Congressional Committee spokeswoman Erin Collins. Collins told the AP that the complaint is a desperate attempt by Democrats to divert attention from their “lackluster lineup” of candidates in this year’s elections.

Often I find the spokespeople for the National Republican Congressional Committee and their counterpart in the Senate are a few fries short of a happy meal, but that was a good response.

The “lackluster lineup” may be true. It’s hard for me to see any of them beating Gianforte – that is if he keeps his hands off reporters.

Word came out this week that the summit planned between the United States and North Korea was being canceled.

It’s just a guess (and a guess that is shared by many) is that the reason the North Koreans got cold feet was because of the talk from National Security Adviser John Bolton. Bolton referred to the “Libya Model” when talking about how to deal with North Korea. If you are Kim Jong-un it does not take much investigation to know that the “Libya Model” was not too good for dictator Muammar Gaddafi.

The good news is that the White House gift shop has discounted the commemorative coins for the canceled summit! Check them out HERE.

To all the folks attending “Sasquatch 2018” at the Gorge Amphitheatre this weekend, have a great time. Party on…

4 thoughts on “Caught My Eye…”