The three hardest things to say are:
1. I was wrong
2. I need help
3. Worcestershire Sauce

Today’s column takes a quick look at these people/issues:

Montana’s latest temporary tenant in the U.S. House, Matt Rosendale, issued a statement today via Twitter that got some attention:

“I oppose impeachment as well as other methods of denying President Trump his lawful term in office. Efforts to impeach or remove the president are media stunts drawn from left-wing fever dreams. January 20th will mark the transfer of power to President-Elect Biden.”

At least old Matt is acknowledging that Biden will be President. As for “left-wing fever dreams,” that’s an overused term that was even used by Meghan McCain at one time. Overall, it was a poorly presented statement via Twitter, but what the heck, it got some publicity and that’s what counts.

As reported by many, like Politico, Speaker Nancy Pelosi issued Vice President Mike Pence an ultimatum on Sunday night — invoke the 25th Amendment to remove President Donald Trump in the coming days or Democrats will proceed this week with impeaching the president for an unprecedented second time.

The vote to impeach Trump will take place Wednesday if Pence doesn’t act.

So I guess if I was Trump, I’d want to meet with my best buddy, Mike Pence, to see what he was thinking.

Boom – A senior administration source confirmed to CBS News that President Trump and Vice President Mike Pence spoke Monday evening in the Oval Office, their first meeting since the assault on the U.S. Capitol last week. The source described it as a “good” conversation. A former White House official with close ties to Pence earlier told CBS News that the vice president is “discouraged, disheartened, hurt and stunned.”

Poor Mike. He’s been a loyal Vice President and Trump went after him pretty hard in the last few weeks and placed a lot of pressure on him to do something, anything, to win the already lost election. Some of Trump’s rioters wanted to hang the VP on the Capitol grounds. No wonder Pence is hurt; he’s been shit on by Trump and his supporters.

These fellas won’t be hanging out together after January 20 and Pence will never be President.

One interesting thing that was brought up in the New York Times Impeachment Briefing was this:

The Constitution says that for somebody who is convicted in a Senate impeachment trial, there can be an extra recourse or punishment on them, which is a disqualification to ever hold federal office, including the presidency, again. You have to convict first, and then it’s actually a lower threshold to do this penalty. It’s only a majority of the Senate. If he were to be convicted, they could see to it that he couldn’t run for office again.

This would be an easy way for all those Republicans (Rubio, Cruz, Paul, Graham) who want to be President to vote to convict and then vote for the extra punishment to keep the leader of the Republicans (Trump) out of the 2024 race.

Even Batman wears a mask – so Mask Up! 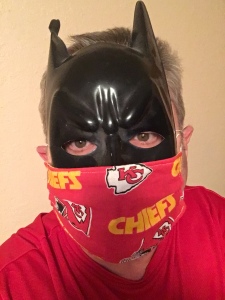