MTN News is reporting that a state district judge says if Montanans postmark their absentee ballot for the primary election by Election Day on June 2, the ballot should be counted – if it arrives to county election officials no later than June 8.

Judge Don Harris of Billings was not done yet. MTN also reports that Harris blocked both the ballot-receipt deadline and another law – the Ballot Interference Prevention Act, which restricts how absentee ballots may be collected and delivered by people other than the voter.

I hope the Montana Supreme Court sides with Harris.

In the political world, it’s well-known that Republicans want to put roadblocks up to prevent easier voting. Democrats want to make voting easier.

I want to see voting made as easy as possible as long as there are checks along the way to make sure it’s safe and legal. In Montana I have voted by mail for several years and like it. I feel it is safe and secure.

Please make sure you vote in the Montana Primary Election on June 2.

Unfortunately, some people still do not understand why we have a Memorial Day or what it means. Even President Trump misunderstands what Memorial Day is all about. He sent a tweet on Monday that said, “Happy Memorial Day!” 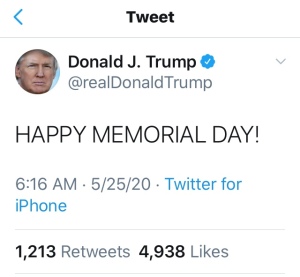 I wish he would explain why he is wishing fellow citizens a “Happy Memorial Day” when the day is set aside to honor those who died while serving our country. Is it really a day to be happy?

That was just one of several emails from the Trump campaign on Memorial Day. It would be nice if they gave it a break for just one day. They don’t honor the fallen by selling caps and shirts.

As for the Biden Campaign, I only saw two emails on Memorial Day. The subject of one was, “May we spend this Memorial Day honoring lives and memories.” They did not have a sale or even try to raise money. Biden’s email was appropriate and nicely worded. His other email was a poll question. They could have waited until Tuesday to ask it.

The Montana Republican Party was not to be outdone by the President. They sent an email telling recipients, “Happy Memorial Day” and what they had to say in the email was great, but again they could have dropped the “Happy” part.

Ignorance seems to run wild around military issues – especially from those who never had anything to do with and/or have little respect for our military personnel.

President Donald Trump played golf this weekend. Trump played through as the country observed Memorial Day and closed in on 100,000 deaths in the USA from the coronavirus.

Back in August 2016 he said as President he would be too busy to play golf. Trump looks fat and out of shape on the golf course. If he has to play golf, maybe he should not use a cart.

Before this weekend, Trump’s last golf outing was on March 8. By that point, his golfing trips had already cost taxpayers over $130 million. Sunday marked Trump’s 266th visit to one of his golf clubs as president, and his 358th visit to one of his properties, according to CNN’s count. Trump’s frequent visits to his properties have raised eyebrows and questions over whether he’s profiting from the presidency.

I guess by profiting from using his golf courses it takes the sting out of Trump’s stunt of donating his quarterly paycheck.

Nearly 100,000 lives have been lost, and tens of millions are out of work. Meanwhile, the president spent his day golfing.

The Biden campaign released an ad about Trump and golf. See it HERE.